Nope, I'm not talking about me- this time.

Dina is up to no good when it comes to the Christmas decorations.  And she doesn't care what method we try to use to keep her away, she's gonna bat at the ornaments if she fat well wants to.

She's worse than the boys when they were small.  Matthew at less than two years old, was into rearranging ornaments to his liking every time he was in the room with the tree.  I'd leave the room for 90 seconds and every ornament he could reach was arranged in a clump on all the branches he could reach. In my foolishness,  I'd have to go behind him and fix what he'd done.

That was an exhausting Christmas.

If Dina weren't also destructive, it wouldn't be so bad.  The poor ornament that she managed to destroy used to be a stuffed dog in a stocking.  Not anymore.  First there was the hanger here and some fur there.  Then I went into the kitchen and saw what was left of a nose and eye all over the rug at the back door.  Oy.

Good thing it was Jon's ornament- he was none too happy and I don't blame him, but he doesn't get as attached as the rest of us.

"Black Santa" didn't even make it onto the tree this year.  He's ceramic and I made him in preschool and he's irreplacable as far as I'm concerned.  So he sits in a box, just to be on the safe side.  That was more Jon's idea than mine- he said he wouldn't want to deal with the aftermath if Santa got broken. 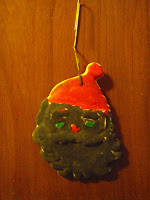 It wouldn't be pretty.

So Dina gets locked in her pet carrier at night.  We tried just closing her in the den the first night and about 10 minutes after Jon came to bed we heard a loud crash.  She was chewing on a frame and it hit the ground.  And the frame will  have to be replaced.  (It was a piece of art that hug behind the tree, so we took it down.  That was probably a mistake.)

Whose idea was it to get this kitten anyway? ;)
brought to you by Jen at 7:23 AM

There was some wrath in our apartment the first year we were married, and Leeza the cat broke my Space Needle ornament. So I know how you feel.