We had a very busy extended weekend.  Among other things, it involved making a batch of peanut butter cups as my offering for Thanksgiving dinner (yum!) and watching movies.  Seven Brides for Seven Brothers, Disney's animated Robin Hood and The Music Man for starters.

We had a wonderful time with Jon's family on Thursday.  It never ceases to be a riot when the family is together.  And my mother-in-law outdid herself again with all the fantastic food.  Yum.  And we all had a big laugh when as soon as everyone was seated at the spread my father-in-law pipes up "Where's the ham?"  He didn't get the memo that the ham was for later in the day, I guess.

It'll be awhile before he lives that down.

Friday, Matthew and I braved the crazy crowd, but not too early.  We didn't get any "deals" per se, but we knew that would be the case in getting the extra sleep.  We were able to finish shopping for Caleb though, so that's good.

One thing about taking the boy with me to go shopping- I couldn't shop for him.  Duh.

We arrived home and then I mentioned to Jon that I had seen our "big family gift" while we were out, but wondered if I could get a better price elsewhere.  So he and I drove into Appleton and indeed we were able to find a better price on a comparable item.  Which will work just as well and the boys will love it!

Did I mention that getting said item, we ended up visiting three different Wal-Marts and two Game Stops?  Crazy.  But all the store staff were amazing, cheerful and helpful- so that was nice.

We also finished up about 99% of the shopping for our adopted family.  Did I mention that we got a family with two boys?  Well, we did.  And although I was a bit disappointed at first, it's worked out just fine and we've had a good time shopping.

We came home, took the boys to the park for a photo shoot, I made dinner and then we decorated the house for Christmas.

Friday was a fun but exhausting day.

On Saturday, we learned something, or at least I did.  Two things, actually.  One, the recipe for gingerbread cookies on the back of the Grandma's molasses bottle is a pain in the neck to work with and two, if your cutter is as wide as he is tall, he ends up looking like a very tan Stay Puft marshmallow man.  Oy. 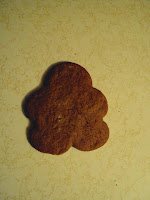 He tasted good, but he looks awful.  And I found the old cutter in an ornament box while we were decorating Saturday night, so I may use a different recipe and the old cutter and see how he turns out.  (and yes, I took the picture and then I ate the cookie.  It was delicious.)

But by yesterday, I was hitting a wall.  We stopped at the corner gas station on the way to church, I thanked Jon for the Diet Coke and asked him to take me home.  So he did, and I spent the rest of the day on the couch resting.  It's just several things in combination, I'm sure, and I'm starting to feel better already.  But four days of go, go, go, were I guess too many.

How was your weekend?
brought to you by Jen at 7:51 AM

It was busy like yours! We only had the 5 of us, though, but the kids helped me decorate, so chaos was present! ;-) I have a really good gingerbread recipe if you need it!