My new camera arrived over the weekend, so I just wanted to share with you a couple of the pictures that I took.

This is our girl; she'll be 6 months old the end of this week.  We love her even though she knocked down the Christmas tree.  (That's another post.....) 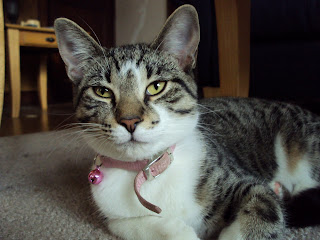 The boys and I went outside to see how the camera quality was and I'm pretty pleased.  Now if I can just get them dressed up for the Christmas card picture this week, we'll be all set. 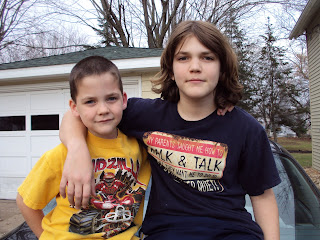 It's been fun to upgrade cameras.  The new one has features like image stabilization and face detection.  As soon as I can get the drive on the computer to cooperate, I'm sure that the included disc will tell me all about features that I have yet to learn about.  Not to mention that I went from a 64mb memory card in the old camera to a 2G in the new one!  Woohoo!

It was a tough weekend to be a Big Ten football fan.  I was born and raised a University of Michigan fan and for the second year in a row, the football squad did not win enough games for bowl eligibility.  Ugh.  And "Oh, how I hate Ohio State" captured a fifth win against the Wolverines. Not to mention that Wisconsin didn't pull off a win this weekend either.  At least the Badgers are bowl eligible; gives me ONE game to watch. (What's the fundamental difference between a wolverine and a badger anyway, besides the colors?!?  Get it, maize and blue versus red and white?!?!  Anyway....)

Caleb and I baked a new cut-out cookie recipe this weekend.  Butter cookies.  I might share the recipe; if you're interested, let me know.  The dough tasted fantastic and the cookies weren't bad either, haha.  We froze the cookies with the plan to defrost them and decorate them Christmas week.  Then, since we're going to Michigan for Christmas, I guess we'll take them to share with my family.  Caleb enjoyed helping with the cookie cutters but finds the baking process boring so he was out after that.  But he did reappear to request a cookie, of course.

I'm excited to get together with Jon's family for Thanksgiving this week.  Even though we're usually crowded into my in-laws home, we play games and eat and laugh and have a great time.  And of course, I have a batch of peanut butter cups made to share.  They've been in the freezer for about a week and Jon's been good about leaving them alone.  Of course, one batch is never enough, so Matthew and I will create a second batch when the boys are home on Wednesday.

And finally, yes, you read that right; we did put up the Christmas tree this weekend.  This is against my upbringing, haha, but it was for a purpose.  We'd intended to see how Dina would react before we placed our ornaments on the tree and were possibly met with disaster.  Well, Sunday morning, the tree was on its side, so I posted to my very wise group of FB friends for advice and it was suggested that we anchor the tree.  That has been done as of late yesterday afternoon; and we were a bit surprised to find that the tree was still standing when we arrived home from church in the early afternoon.  We decided to just maybe she scared herself and decided she better not climb the tree.  And the advice I got for keeping her out from underneath the tree is a mixed bag; it seems to be working, but not as quickly as I'd like.  She's pretty stubborn.  Gee, good thing she's a cat or I'd wonder where she got that from.

There ya have it- everything you wanted to know or didn't about our weekend.

Your boys are so cute!

Miss Dina is getting so big! Maybe I'll bring Kate the dog over, that oughta keep her out of the tree! ;-)