Today the boys and I were supposed to have lunch with Matthew's godmother, Stephanie. But sometimes things come up. So, when we were planning to leave at ten, at 9:15 we found ourselves "all dressed and no place to be".


Well, that did give me time to get some laundry going. Then I decided that since I had been planning to buy the boys lunch anyway, we might as well head into town for lunch.

We'd called Jon to see if he wanted to join us, but unfortunately, he was unavailable.


We drove through the drizzle and fog to A-town and had a delicious lunch of "2 for $20" buffalo wings and chicken tender baskets. Water for me, Mt Dew for Matthew.


Mini- cheeseburgers, fries and Sierra Mist for Caleb, in case you wondered.


Matthew's best friend Eric lives about 2 miles from where we had lunch so he asked me if I would mind stopping to see if Eric was home. He was pretty pleased to see that Eric was indeed home and that Lisa (Eric's mom) said Matthew could stay the afternoon if he'd like.

Caleb and I went shopping. Alas, we have come to the conclusion that the only way to get a cheap 7' artificial Christmas tree will be to be at the store as soon as they open next December 26. There was not a tree of any size in the whole place. Not really surprising.

The cashier asked Caleb if we had a real tree. He told her no, it's a fake and she said "well, I see you must have a cat" hence, the bag of Cat Chow on the counter; all her brain cells were firing, that one. She said that she has a real tree and that her cat kept drinking the water from the stand.


She did say that it should be that the older Dina gets the less interested she'll be in the tree. For Dina's sake, I hope she's right.

Two years ago today, everything in the apartment was packed and ready to go. 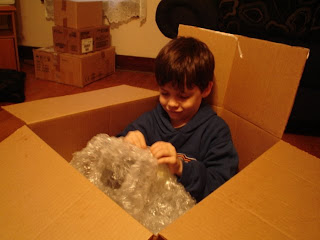 We waited for family and friends to arrive, who had generously donated their time to help us load a truck and drive to the new house.

Loading didn't seem to take as long as it had ever taken before for any other move.

As we drove out to the new house, it was foggy and starting to get icy.

When my in-laws arrived, it was downright nasty outside.

We have a large 5-day cooler which we loaded with food from the refrigerator from the apartment. As soon as I finished unloading the cooler at the house, my first thought was "Who's gonna take the cooler back to Appleton?"

Good food was brought in and we ate well after most items and boxes at least found the appropriate floor of the house to stay. 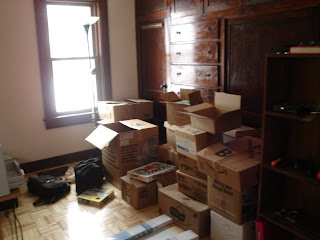 I cried while my father-in-law offered a prayer blessing us in our new home.

I'm tearing up thinking about it even now.

We haven't made many changes, even cosmetically, since that day. But with each passing day, it feels more like our home.

And we've no plans to leave it anytime soon. 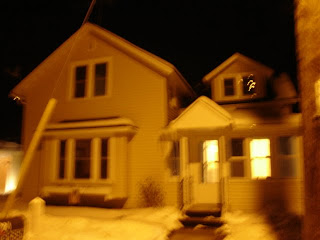 We seem to be having a bit of an Everybody loves Raymond moment in this house.

The laundry was washed, dried and folded. It was even taken up to the top of the stairs.

And there it has sat.

I don't know if we've just been too busy or if we're having a battle of wills here.

that's what Christmas is all about....

You know how if you can't say something nice, you shouldn't say anything at all? Well, that goes for the title of this post. Not necessarily the body of the post.

The store has been insanely busy the last week or so. I know, I know, the Christmas rush is on. And most people are perfectly pleasant, wish others a "Merry Christmas" and that sort of thing.

Those aren't the ones.

You've seen them out and about, I'm sure. They're the ones circling the parking lot trying to get the closest space. Rushing in to the store like they're on fire. Slapping their purchases down on the counter without a word.

Or better yet, rolling their eyes and huffing loudly when there are more than 2 people in any one checkout line.

Didn't people learn to be patient in Kindergarten? Everybody gets a turn, cripes.

As a store employee, I smile and ask if they found everything okay. Would you like a bag for that item today? Thanks for coming in - have a great weekend!

What I really wanna say....my Mom told me to keep to myself.

How are you surviving the last minute Christmas rush?
brought to you by Jen at 8:02 AM 1 comment:

when life gives you sick days

Sunday morning we awoke to several inches of new snow and quite a bit of blowing and drifting. We'd decided late Saturday that we weren't going to even attempt the hour drive to church, especially with it being my weekend to work.

Good thing we got a call that services were cancelled; that lessened the guilt.

So Sunday morning, Jon broke out the snowblower for the first time of the season, Caleb played out in the snow, Matthew played his trumpet at random times and I watched a little football.

Don't ask me to talk about how the game turned out. Madness.

About two o'clock, I thought that maybe I should check my messages to see if just maybe work had decided that I need not come in for the 3p-8p shift.

But I did find a message from Carrie, taking me up on the offer to watch Justin in the morning the next day so that she could take Kyle in for his 2 week checkup. I called Carrie back and told her that of course I'd drive out and watch Justin and that I'd see her around 8:15.

(I haven't gotten any pictures of the new baby, but I will. Darn camera batteries were completely dead last week when I visited...)

Imagine my surprise when I am paged at work for a phone call shortly before 5pm. It's Jon, letting me know that I might wanna call Carrie immediately and see if she had a backup plan; Caleb's just gotten sick and he cleaned up a mess to prove it.

I call Carrie and of course, her being her, she says it's fine, that she needs to figure out how to juggle both boys eventually anyway and to not worry about it. I still felt terrible for having to cancel. And sad that I wasn't going to have the extra time with Justin. Sad.

So, long story short (sorry) neither Caleb or I got much sleep Sunday night. And, of course, I called the school first thing yesterday morning to inform them of Caleb's absence.

Matthew left for the bus at 9:15 since there was a 2 hr. start delay due to severe windchill. And Caleb drove me crazy from that moment on.

"Mama, can I have some crackers?"

That child has a tendency to talk non-stop. I have no idea where he gets that.

Once he spent about an hour playing computer games with no more measurable symptoms, I went to take a nap. And he was none too keen about sleeping in his own room last night, but I needed to sleep in my own bed. And he did just fine; was bouncing into bed last night, out of bed this morning and went back to school. Whew.

Matthew did inform me that his band director has the flu and is still at school, so he may be next.


I walked into the store yesterday and all I could hear was the jingle of the stupid bells that you had around your ankle.

For the record, you're way too skinny. You might wanna try some carbs, cheese and ice cream to fatten up. It worked for me.


Just so you know, I think that your time is limited in this house. I was already asked why it was that I had to go Christmas shopping. You may not need to stop here for 2011. Just have Rudolph and his rockin' team fly your anorexic self right past here. I'll take care of the rest; I'm the mother, it's my job apparently.


I'm pretty sure that because of my poor attitude, I'm not going to get what I really want for Christmas this year and that's fine. Just bring me a new watch and a new wallet and I'll work toward getting what I really want. 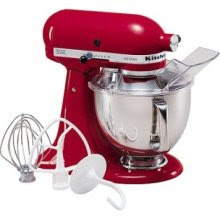 My dad would tell me that I'll just appreciate it more that way anyhow.


This post brought to you by Mama Kat's Writer's Workshop #62. 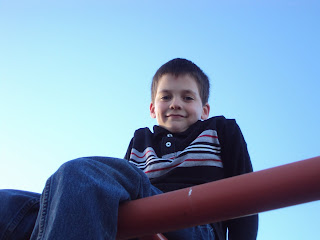 and I made these 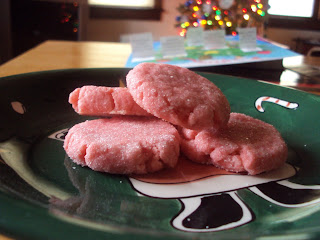 yesterday afternoon. We ate a few and then the rest went into the freezer for Christmas. While the picture makes them look like PlayDoh, I promise they don't taste that way. You can get the recipe here.

Then this morning, the same boy informed me that if I got him the two most coveted items from the toy catalog, all I'd have to spend is this: 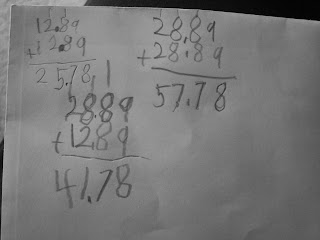 Too smart for his own good.
brought to you by Jen at 3:05 PM No comments:

The van is on the fritz again. One minor thing started happening as soon as the weather got cold, then Wednesday morning on my way to work the "check engine" light came on. Jon took it next door to the auto part store to get a diagnosis and TWO codes came back, both transmission related.

It's still "under warranty" for what that's worth, so it goes in tomorrow morning and is supposed to be done by Tuesday.

We have about 1/3 of the Christmas shopping done. We went yesterday afternoon and actually only had to make two stops to get everything we were looking for- for now. I may have made an error though, in telling the boys that we were going shopping- C said "Why do you have to go Christmas shopping, Mama?" I thought quickly and said "Well, you know how you get one gift from us and Santa brings the rest? We're going to shop for what we're getting you." He immediately produced his list of toys from the Fleet Farm catalog.

We ended up watching a parade that our kid wasn't even in this weekend. There weren't enough bus drivers to get the entire marching band to the beginning of the parade route on Saturday and our kid was one of the ones left behind. When the bus went back for the second load of kids, they were diverted due to the parade getting started and when they finally arrived at the lineup, the high school principal told the driver to take the remaining musicians back to the school.

When we didn't see M as the band went by, we just figured that he'd ended up on the other side of the street and we missed him. Imagine our surprise and shock when we picked him up at school thirty minutes later and he told us that he didn't even get to participate in the parade.
brought to you by Jen at 9:47 AM No comments: