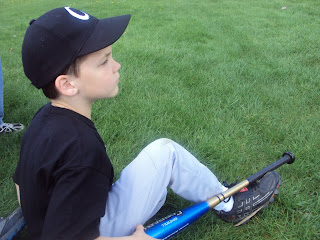 Caleb's playing baseball. And believe me when I tell you that I use that phrase loosely.
When his team is up to bat, he's all for active participation. Sometimes a little too active, as he's been reminded more than once that he shouldn't walk in front of home plate to retrieve a bat when a runner is coming into home at full speed.
Good thing when that happens, he's always "on deck" so he's wearing a batting helmet.
He's gotten several hits already this season, as long as he uses his own bat. And he's only been tagged out on base once, and that was at third.
The outfield is a totally different story.
If there were awards given for pirouetting, ala 'Sound of Music' style out in left field rather than backing up third, he'd qualify for High Honors.
If "sand-castle making" were part of the criteria for making the team, he'd definitely be chosen first. During the first game of the season, Jon swears that he heard Coach Pat tell Caleb to "save the sandcastles for the backyard."
His coach is so patient with him, and we are definitely thankful for that. He stands near Caleb most of the time and redirects him.
And if he's paying attention, he does fine. But that's a big "if".
I've taken to sitting in the van with my head in a book and the windows up during practice. Ignorance, even partial, is bliss.
brought to you by Jen at 8:02 AM